There are no upcoming events.

Born in a dramatic series of eruptions only 900 years ago, Sunset Crater is still the youngest volcano on the Colorado Plateau. Visitor Center exhibits explain the powerful geologic forces and their aftermath. See for yourself on the one- mile, self-guided Lava Flow Trail.

Sunset Crater Volcanic National Monument was preserved after a movie company wanted to blow up part of the crater to create a landslide for their film. The public knew that this site was too special to allow for this and it was declared a National Monument by President Hoover in 1930. Since then it has remained an important location to preserve natural and cultural resources of the area. This was one of the areas that the astronauts with the Apollo Missions came to train. In fact, the surface of the moon was mapped in the cinders around Sunset Crater Volcano National Monument to allow training astronauts the opportunity to test drive the lunar rover and identify geological features in preparation for the 1969 moon landing. Watch the scenery change from volcanic lava flows and black cinder from Sunset Crater’s eruption around 900 years ago to high desert juniper and sage bushes of the Wupatki basin.

The drive, round trip from Little America will take about 1 hours 45 to 2 hours 30 minutes depending on the time spent at the stops along the way.

The San Francisco Peaks are a quiet volcanic mountain range with six summits including Mount Humphreys towering at 12,633 feet, the tallest peak in the state. Once an active stratovolcano, presumably as high as 16,000 feet, the San Francisco Peaks serve as one of the most distinct geological features of the Colorado Plateau. Often described as a forested gem, in the crown of a great desert state, to some the Peaks are a sacred place, to some they are a place of recreation and to others, one of introspection. But to all they are a place of awesome majesty and beauty that is unrivaled throughout the region.

This drive will include a trip up to Snow Bowl (fantastic views). 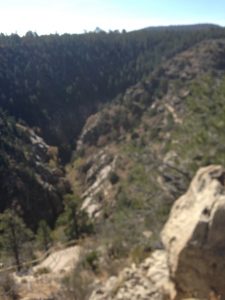 Walnut Canyon National Monument*
The ancestral home of the Puebloan people over 800 years ago, Walnut Canyon offers spectacular views from the visitor center and easy, accessible 0.7 mile, 30 minute round-trip Rim Trail. For more up-close views of the 24 Sinaguan cliff dwellings, hike the Island Trail to the canyon floor, a strenuous 0.9 mile, 1 hour round-trip. The trip via I-40 is a quick 10 minute drive to the visitor center, but there is an alternative return route via old Route 66 that will take closer to 20 minutes. For those who can’t tear themselves away from the Triumphest events, this is a quick trip worth taking to get a small taste of the local area. It is also worth spending more time for greater exploration.